Leaving my job in 2016 didn’t feel brave at the time. I’d saved up a bunch of money and I was looking forward to 6 weeks’ worth of Scout camps and volunteering. I was going on an adventure! Winning my first clients felt easy as well. I just had to email 10 people I knew (many of them also through Scouting) to see if anyone needed help with their social media or their website. I got a gig writing Facebook content for one small business and built a Wix website for another one. A few weeks later I started copywriting for an agency where the graphic designer had a kid in my Cub Scouts.

The network, experiences, and sense of adventure I gained through Scouting were fundamental resources to help me leave my safe, sensible job and enter the world of self-employment.

Back in 2014, I applied for a role in the International Service Team at the World Scout Jamboree in Japan in the height of summer. Based on the skills I had, and my general distaste for extreme heat, I put myself down to work in the media team – mostly an indoor job – and was assigned to be a sub-editor on the Newspaper team – result!

Then I started looking at how far it was to Japan and wondered if there might be more adventures to be had if I extended my trip beyond just the 2 weeks of the Jamboree. I messaged an Aussie friend and a few weeks later, I had a plan. Australia’s not exactly on the way to Japan, from Edinburgh, but it would still be less flying than if I made two separate trips. Only one small issue remained – I’d need to be off work for almost the entire summer. I wanted to take a full month of annual leave from 10 July to 10 August 2015.

Fortunately, my team at work were reasonably accommodating, and my leave request was granted, on the condition that I promised never to take more than 2 weeks leave at a time for a very long time.

Time flew by and in July 2015 I arrived fresh faced and excited, ready to start work on the Jamboree newspaper as part of a team of 25 other volunteers – photographers, reporters, graphic designers and other editors. That very first day I also made friends with a stick insect, although that’s only incidental to our story. 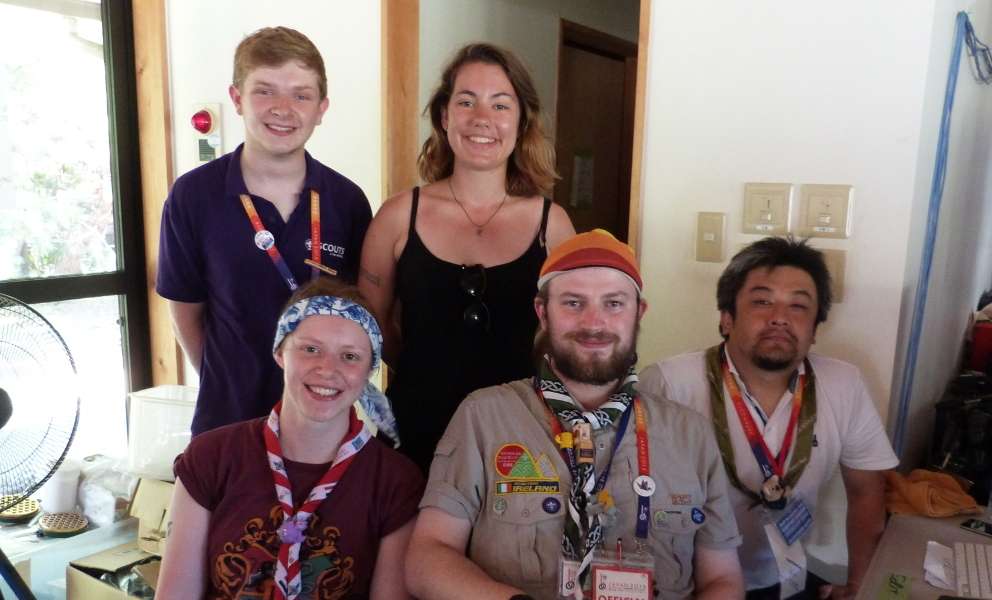 Every day I got up at 5.30 (it was too hot in the tents to sleep any later), and queued along with thousands of other volunteers for breakfast. By 7.30 I’d be ready for my 20-minute ‘commute’ across the enormous jamboree campsite into the media centre (which had shade and fans and WiFi, and was my idea of heaven compared to the rest of the Jamboree site…) We had a team meeting every morning where Ger, our fearless leader, would assign task to everyone for the day.

We had goals, we had plans, we had deadlines. We made our own decisions, we solved our own problems, and we ate a lot of ice cream on the patio in the shade. And by the time we got to issue four, we were a tight knit team, and I was having the time of my life.

And that’s in spite of the fact, I was working about 14 hours a day (with the occasional ice cream break). I’d gone to the Jamboree along with more than 100 other Scottish Scout leaders, and only spoke to any of them for a few minutes each day. We worked so late each night on the newspaper that the canteen delivered food to us because we were never finished in time for the dinner service.

I said to my friend Kay one evening as we sat scoffing our bento boxes, waiting for final proofs to read over, “I wish my real life was like this.” I’d been in the world of work for 4 years at that point, and none of the jobs I’d had so far had brought me anything like this much satisfaction. I knew it was time for a change.

The moment I realised what I was meant for

By issue 8, poor Ger, our fearless leader, was getting burnt out. While I sat with the other editors sat on the patio eating ice cream, chatting, and waiting for the reporters to get their articles out, he had to go to meetings with the other team leads and talk about grown up things. He needed a break and I wanted a challenge. 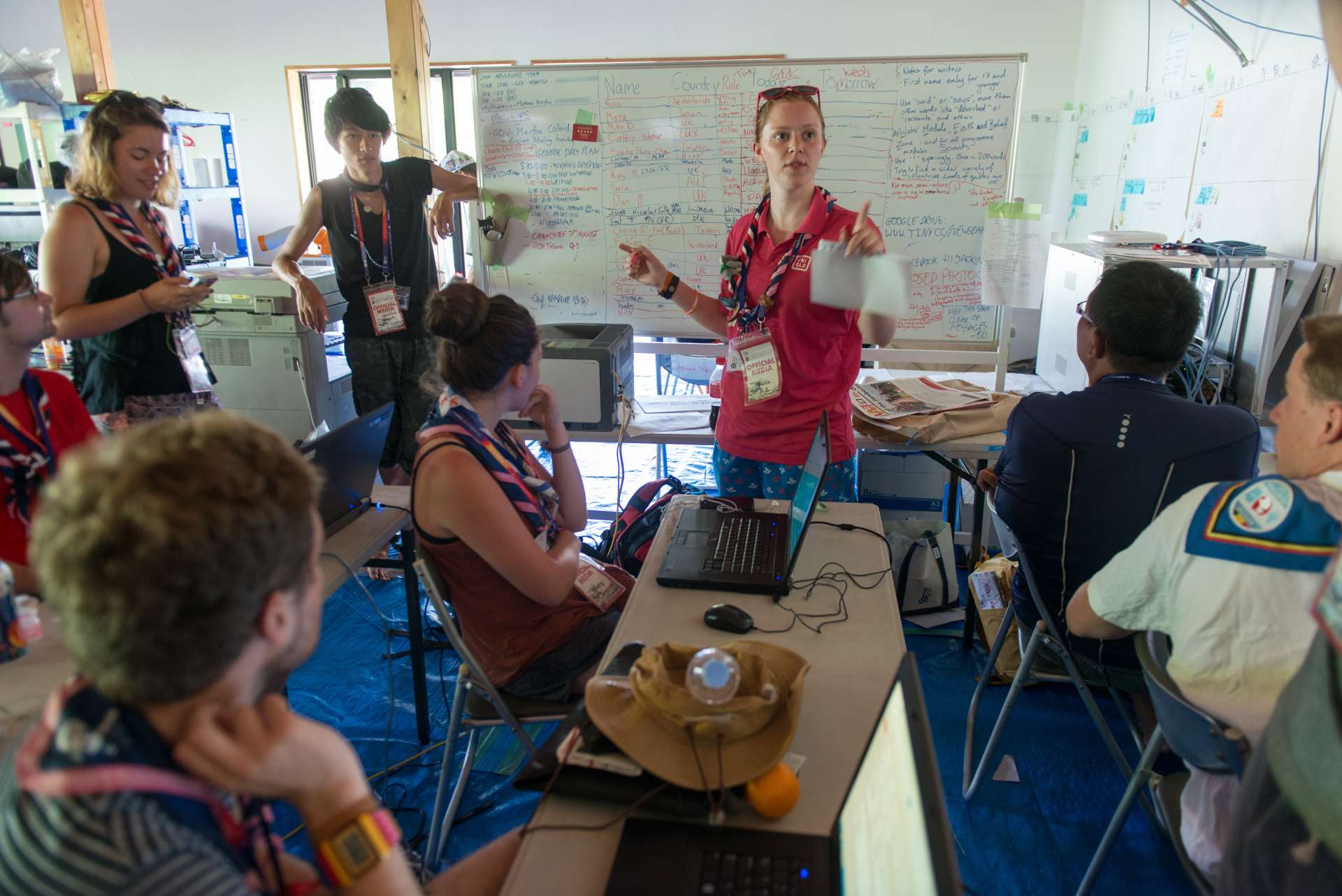 Standing in front of the white board that Tuesday morning, I was so happy. I felt like I was doing exactly the thing that suited me. I loved leading the team, I loved helping people figure out their articles, I loved making the decisions and solving the problems with everyone’s help.

When I got back from the Jamboree, and back to my grey office walls and fluorescent lighting, it took me all of 8 seconds to start planning my escape. I was going to take my writing skills, my creativity, and my love of the internet and I was going to get me a job in Marketing.

The problem was that all the marketing agencies looked at my official experience – writing informational web pages with little room for imagination and innovation – and decided that didn’t count. I didn’t have the experience they were looking for in the roles I wanted to do. I got offered a couple of roles where I’d be copying and pasting other people’s content into Buffer, day in day out. I’d be just as frustrated and bored as I was in my existing job, but on half the salary. I figured there had to be a faster way to get where I wanted to go.

By Christmas time I’d decided I’d go freelance for a while and do some marketing for people who I knew. Six months or a year of marketing experience, tacked on to my previous career history, seemed like it would be a better offer, and a chance to demonstrate that my skills really did transfer. I figured I’d show that I could walk the walk, as well as talk the talk, and would get hired on the back of my results.

So I made the New Year’s Resolution in 2016 that I would leave my job that year by my birthday (in July) and start freelancing. Went to my first ever Business Gateway workshop on the 14th January (and met the wonderful Andy Johnston), and started working on a website, and a brand.

At the same time, I started signing up to Scout camps for every week of the summer. I booked in 10 days with my own troop, then two weeks at Blair Atholl Jamborette right after. When I booked a third Scout camp, another 10 days over in France at an event called Roverway, that I knew I really would have to had in my notice. I knew if I didn’t book those camps, I might never have had the guts to meet with my boss and resign, because I found it hard to explain exactly what I was leaving for.

Quitting without a job lined up

It felt really hard to justify my decision to leave when I didn’t have a single client, another job or anything at all lined up. All I had was a few grand in savings and a lot of enthusiasm. If it hadn’t been for those first two guys who took a chance on me when I was all brand new, I’m not sure where I’d be now!

And of course, when I did start freelancing, I realised how much I loved deciding my own schedule and working on my own terms. I learnt so much so quickly, figuring out branding and pricing and managing my time. I realised I didn’t like copywriting, but I loved making websites. I didn’t like Twitter but oh boy did I love Instagram. I certainly didn’t know back in 2016 how much time and energy I’d come to invest in training myself, and getting help from others.

Everything was going grand until January 2018. I’d just started working with Digital Boost clients through the Business Gateway and I was going to deliver my first workshop the next month. I’d met a start-up founder in November and had just invoiced for a piece of work we’d done together. I was working with Andy on designing my new brand – The Whin – and had paid a good chunk of the cost already. And then the first Digital Boost project hadn’t finished and the payment terms on the start up’s invoice were so long and all of a sudden, I realised I was as skint as I’d ever been in my life. I had to borrow £100 off my parents so I could afford to buy groceries for a couple of weeks.

For a few days it really felt like I might have messed it up. Maybe I hadn’t worked hard enough, or networked with the right people, or charged enough for my services. I wondered if I wasn’t as good at marketing as I thought, despite all the time I’d spending researching and learning and working on my skills. By that point I’d realised I didn’t ever want to go and work for a boss in a marketing agency after all. I needed to find a way to stay independent, and carry on working for myself, but I was struggling so hard for every half-day workshop and 4-page website. How on earth was I going to turn it around? It felt so grim. But then I got lucky.

I’d been chatting back and forth with my old manager about coming in on a contract to work on some specific online forms. I’d worked on online forms in my old job and really enjoyed the aspects of user experience and service design. It was only three days a week for three months, but it was a gift, and it came at the exact right moment. After those first three months, my contract was extended, I was promoted to project manager and I got a pay rise, and most of July off. And about 5 months, as much as I was enjoying having reliable income, I was SO ready to be done again.

Even though this time it was on my terms, I still wasn’t really happy. I didn’t have the authority to make decisions and have a real impact. And if I had the authority, I wouldn’t have got to spend time on doing the user-focused stuff that I really loved. I have the utmost respect for all my colleagues there, but the contrast between working there and working with a solo-business owner could not have been more stark.

I was done. I was ready. It was time to launch The Whin.

Find us on Social