“The community has grown authentically, I just brought some people together,” with Kim Wilson

Listen to "24 - Successfully growing an authentic community, “I just brought some people together," with Kim Wilson" on Spreaker.

Meet Kim Wilson, personal trainer and founder of the Athena Army. Kim and I talked about choosing not to use Twitter and TikTok, saving for your tax bill, and what it’s like to run a purpose driven business with a community that builds itself.

Today’s episode is sponsored by the All-in-Whin Marketing Method. I’ve been working hard at updating my signature course for 2020, and it’s now open for registration! Click the big yellow button below to get all the details.

Learn marketing with The Whin

Kim started Athena personal training in 2017. It’s grown exponentially over the past year. Especially when Kim started running her own competitions. Kim hosts “mock meets” so people can try out a powerlifting competition. Great for people who’ve never competed in powerlifting before because the atmosphere is a bit less pressured and more relaxed.

So far, they’ve been primarily female and that’s where the Athena Army concept started, although men are welcome. We joked about encouraging more men by bribing them with Mars bars, fitting because that’s the Roman God of war but then Kim would have to change the business name to Minerva, for the Roman Goddess of war in order to match.

“Lifting to me, is a physical representation of mentally overcoming myself.”

Kim’s target customers mostly women who want to become physically and mentally stronger.  When she started training, she quickly noticed the correlation between physical and mental strength. She realised there are many people out there that need an outlet for whatever’s going on in their life and heads, she compares it to a form of mindfulness and that’s what she teaches her clients.

She feels people tend to go for a coach that they identify with. Kim thinks that’s why a lot of women who want to get into powerlifting happen to come to her and that’s why the Athena Army has been dominated by women. She attracts people effortlessly because she’s focused on doing her own thing and helping people. She doesn’t invest much energy in comparing herself to what’s happening around that.

I agree people can get hung up on opinions. Unless it’s your ideal customer others opinions don’t really matter, especially when it comes to marketing choices. Kim has done a wonderful mini film for Athena (assisted by Jodie Mann). It’s not your usual clichéd promo video and she was able to get some of her Army involved.

Kim likes to actively foster a community spirit amongst her clients. She started a WhatsApp group to bring everyone together. She encourages members to share their training videos and support one another through the group.

At the gym she hosts group coaching sessions, they are intimate because she can only coach four people at the same time. The Athena meets events happen every 6 months and are important for bringing the community together. It’s like a networking and social event at the same time. The WhatsApp group, group coaching and Athena meets have all it’s all helped foster the community.

Instagram has also played a part, people tagging each other and embracing the #athenaarmy. When you walk into the gym at a certain time in the evening, you will see Athena tops everywhere. Kim finds this fantastic because it’s just grown authentically around a shared vision and purpose.

“I just brought some people together. And they all have the common goal of wanting to be; fitter, stronger, healthier, physically, mentally. Whatever it is, it makes them feel like they belong, and that’s the most important thing.”

Kim has two different Instagram accounts. One for her personal lifting journey and the other one is focused on the business, community and her lifters. Separating it is a good idea so Kim can talk about her own stuff without feeling like she’s overwhelming people who just care about the business and the community. When it comes to the business Kim doesn’t like talking about “me” and prefers to talk about “we”, because it’s not just about her it’s about her community.

She also uses Facebook but not as much as Instagram. The Facebook page is very business focused rather than personal. She feels the older generation and people in other countries still prefer to use Facebook.

We also chatted about the social media platforms Kim doesn’t use Twitter, LinkedIn and TikTok. The latter is one of the newest platforms used primarily by high school and University students, but those users will grow up and stay on the platform. The first time Kim heard about TikTok Gary Vee was talking about it which made her think it must be relevant. Stay tuned for our upcoming episode on TikTok! Make sure you’re on the email list so you’ll be the first to know it’s available.

I asked Kim what the most useful thing she’s learned since starting her business. A friend advised that with everything that comes in, put 20% away in a savings account. It’s not yours, put it away, that’s your taxes. She’s done that every day ever since and it’s been the most useful thing when it comes to longevity.

Getting an accountant has also been useful, it’s saved her a lot of time and taken away a lot of stress.

Kim also does a podcast called the Muscle Think Tank in collaboration with Steve from Bio Strong. They talk about everything gym related. Kim’s aware running a business can be quite a lonely place especially if you’re running it by yourself. It’s nice to have projects like a podcast where you can chat to someone in the same profession.

I loved learning more about Kim and the Athena Army. You can find all Kim’s details on the Athena Personal Training website or connect with her on Instagram. 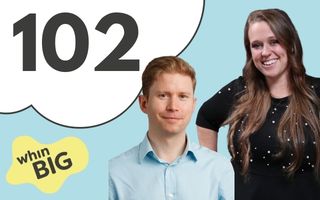